Welcome to this church, which serves the united parishes of Yelverton with Alpington. 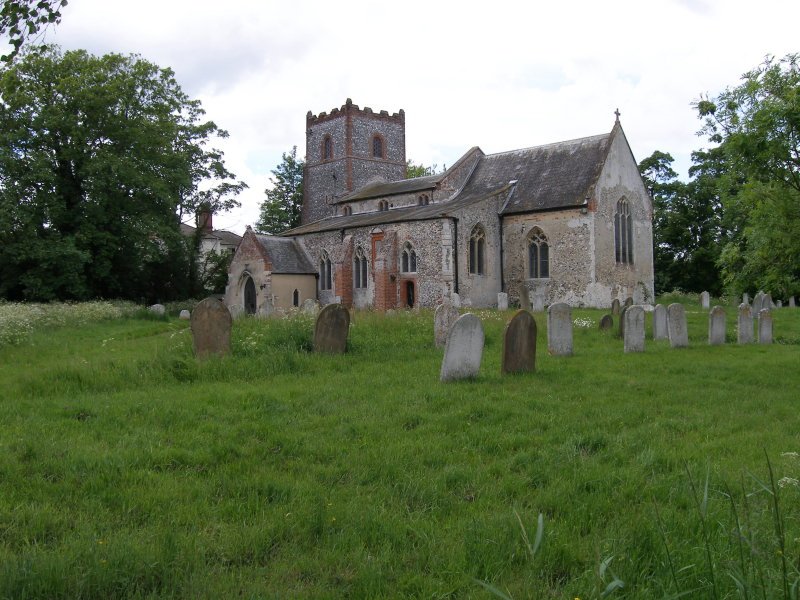 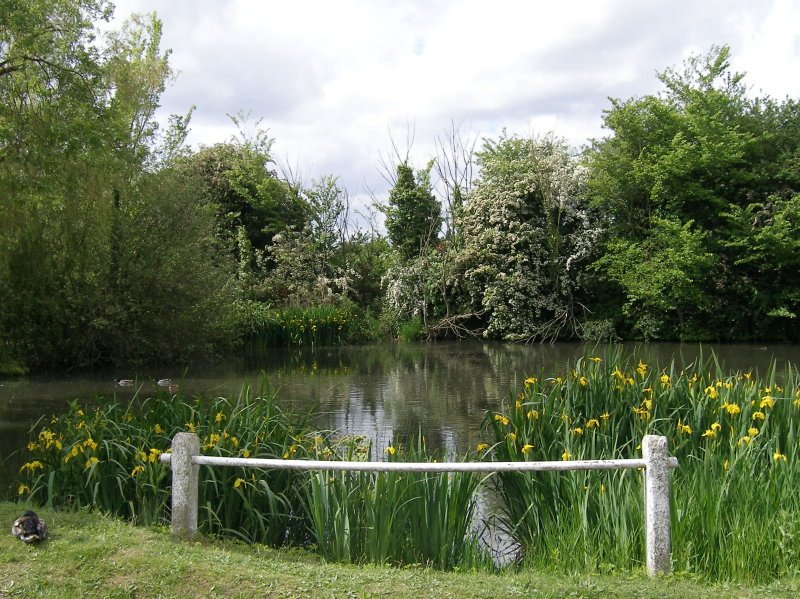 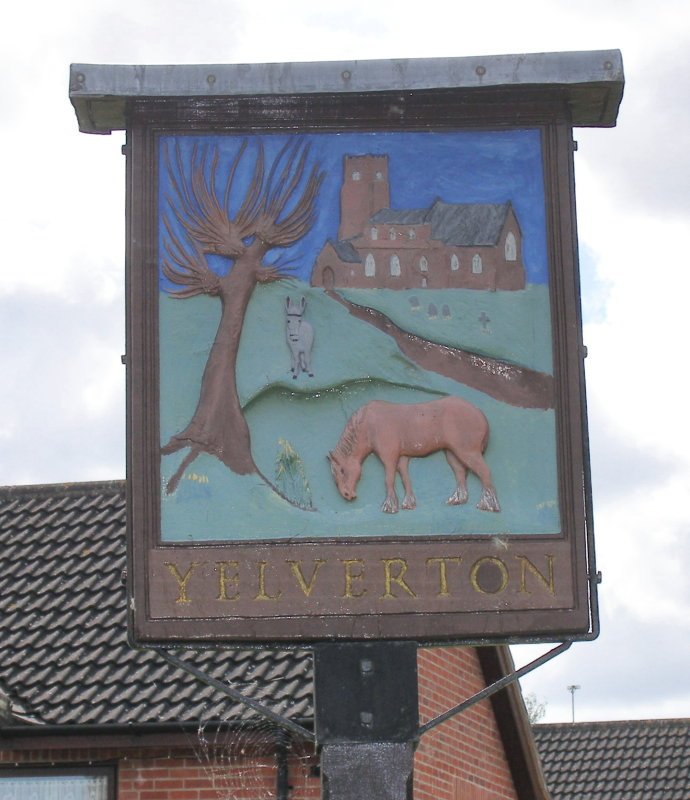 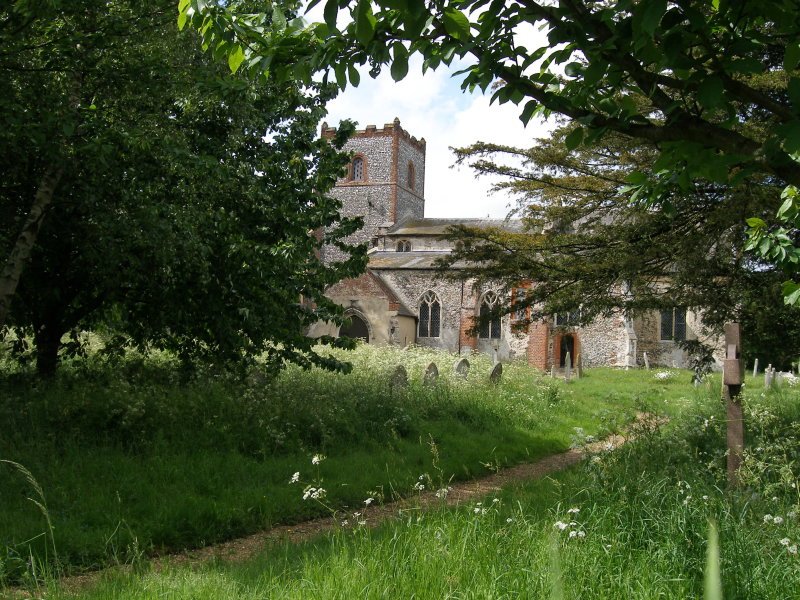 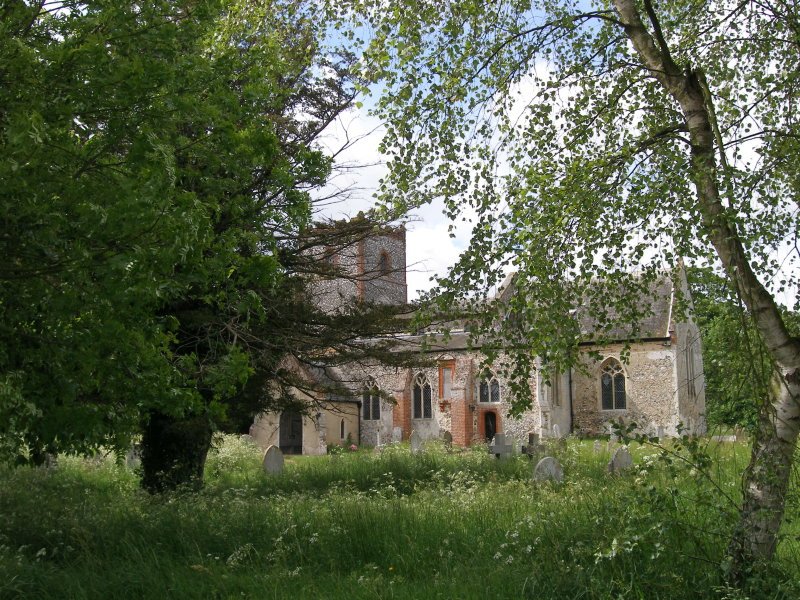 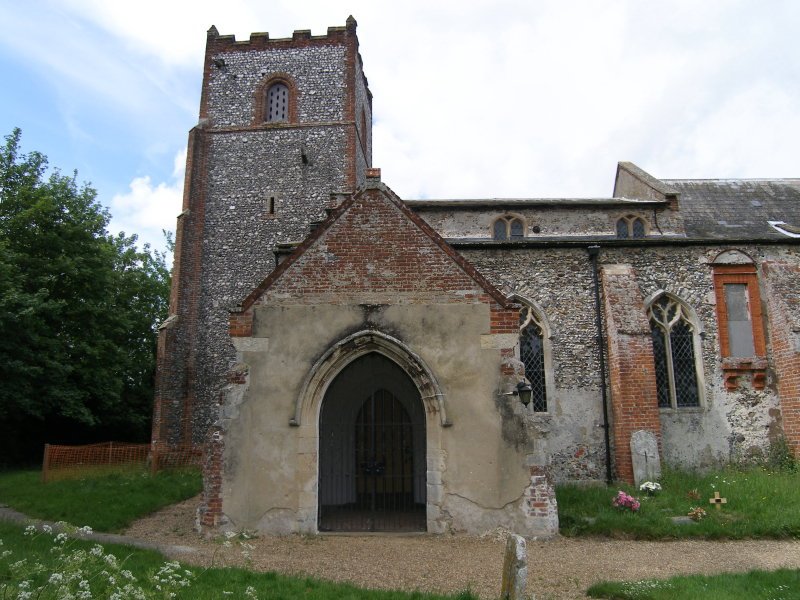 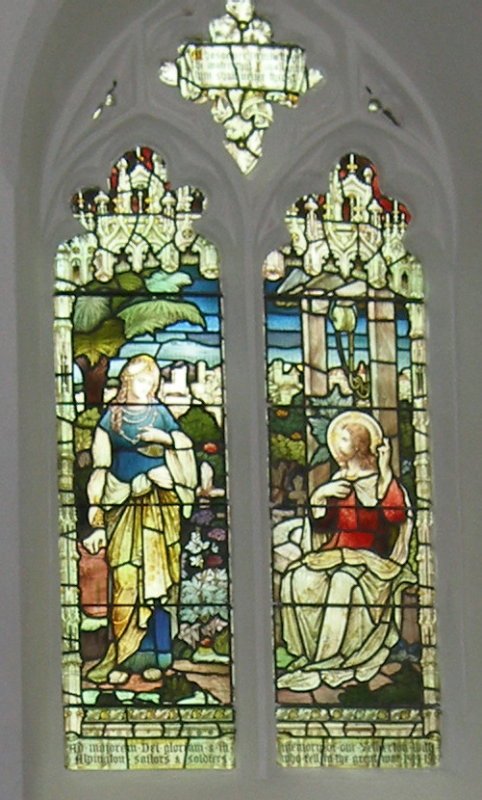 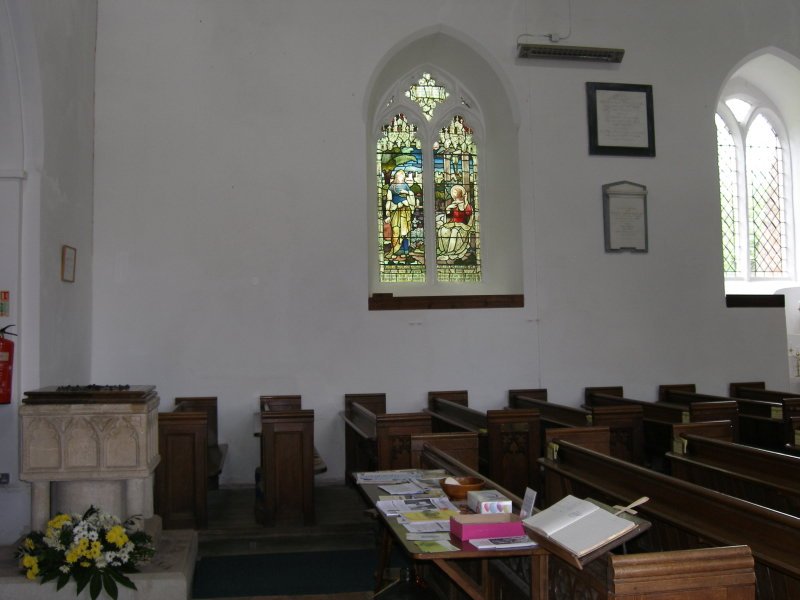 The east window contains some modem glass, but above it are some fragrncnts of mediaeval stained glass, of 14th or 15th century date. These are somewhat jumbled, but include some canopy work, a crucifix, a deity holding an orb and one of the orders of angels. It has been suggested that these fragments may have been part of a window depicting the Coronation of the Virgin. 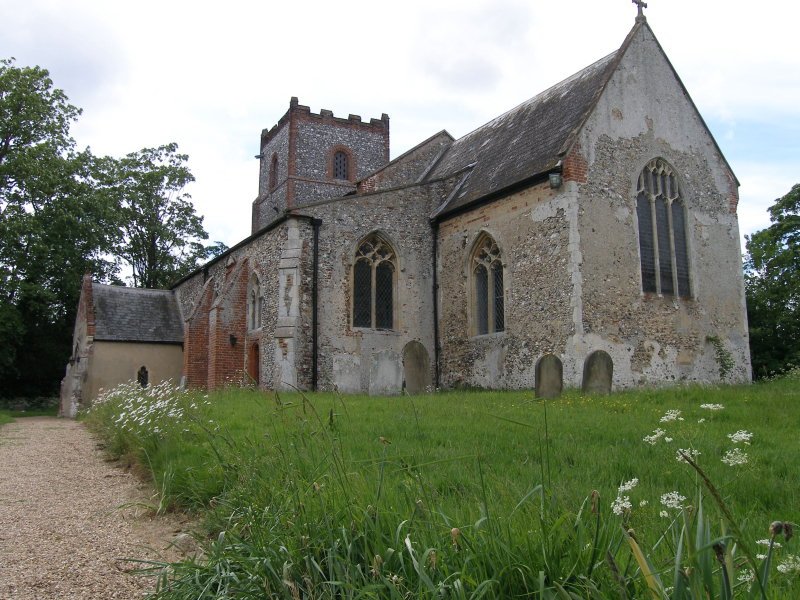 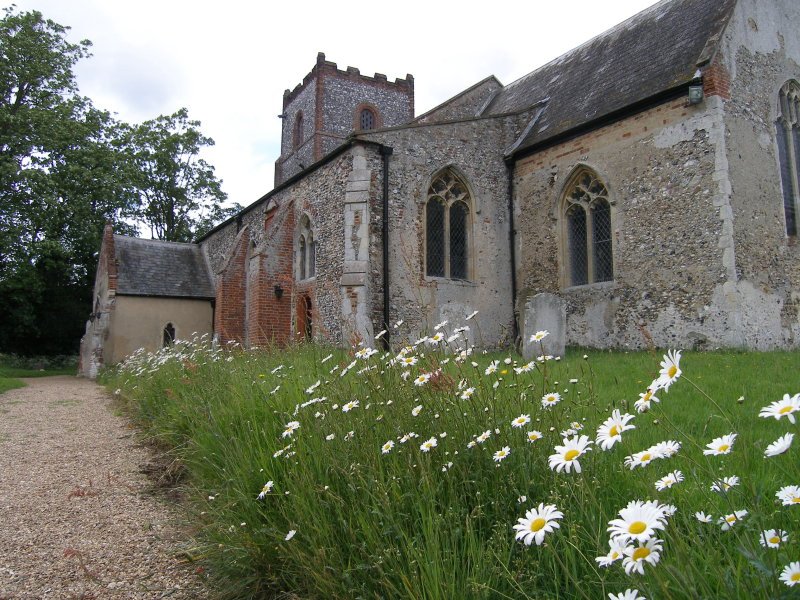 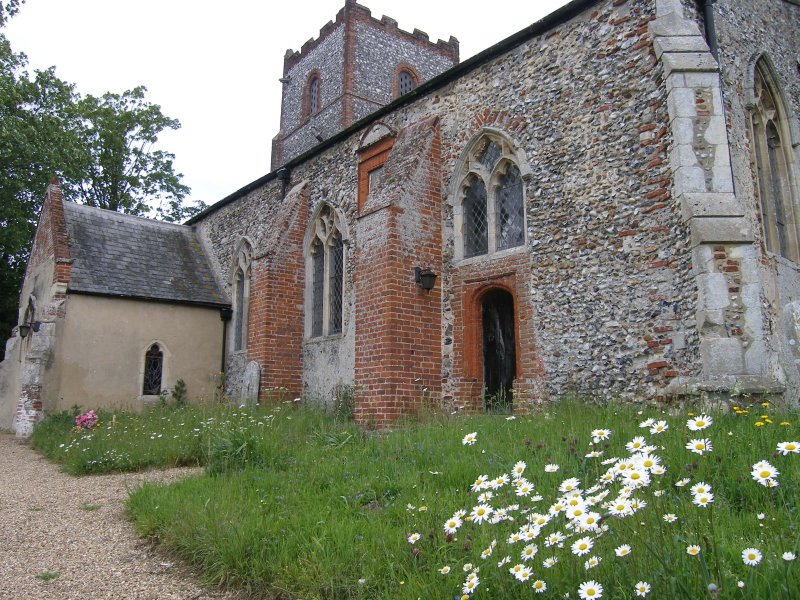 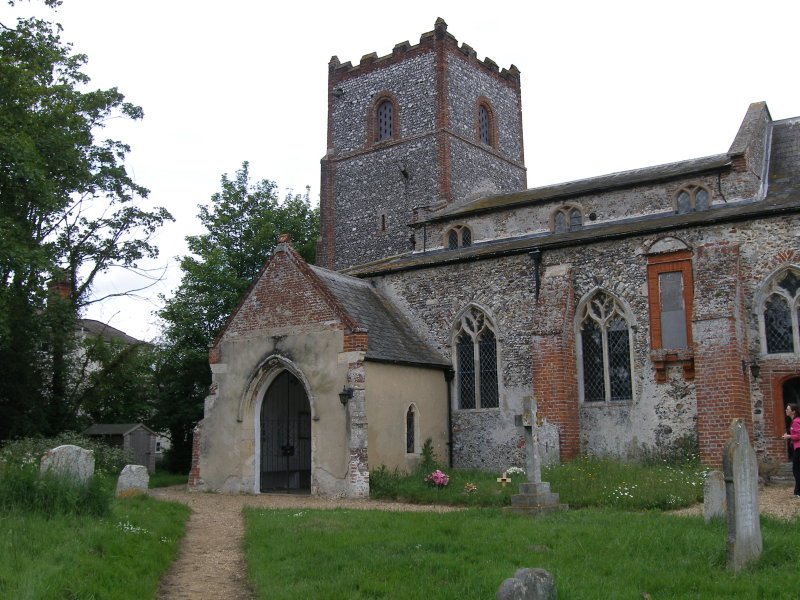 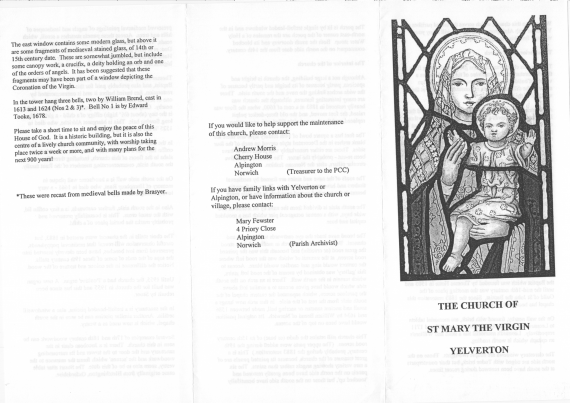 Please click on the image above for the full size scan.

Please take a short time to sit and enjoy the peace of this House of God. It is a historic building, but it is also the centre of a lively church community, with worship taking place twice a week or more, and with many plans for the next 900 years.
*These were recast from medieval bells made by Brasyer. 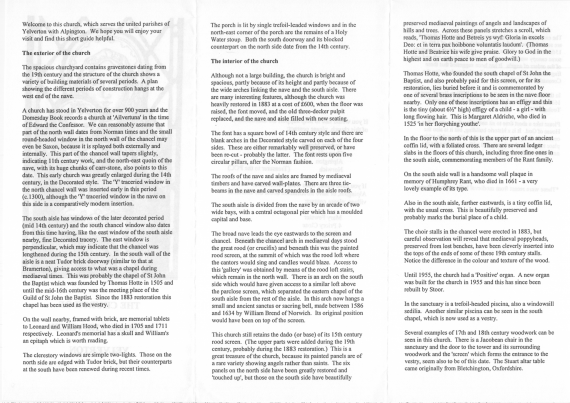 The exterior of the church.
The spacious churchyard contains gravestones dating from the 19th century and the structure of the church shows a variety of building materials of several periods. A plan showing the different periods of construction hangs at the west end of the nave.
A church has stood in Yelverton for over 900 years and the Domesday Book records a church at ‘Ailvertuna’ in the time of Edward the Confessor. We can reasonably assume that part of the north wall dates from Norman times and the small round-headed window in the north wall of the chancel may even be Saxon, beomse it is splayed both externally and internally. This part of the chancel wall tapers slightly, indicating 11th century work, and the north-east quoin of the nave, with its huge chunks of carr-stone, also points to this date. This early church was greatly enlarged during the 14th century, in the Decorated style. The ‘Y’ traceed window in the north chancel wall was inserted early in this period (c. 1300), although the window in the nave on this side is a comparatively modem insertion.
The south aisle has windows of the later decorated period (mid 14th century) and the south chancel window also dates from this time having, like the east window of the south aisle nearby, fine Decorated uacery. The east window is perpendicular, which may indicate that the chancel was lengthened during the 15th century.

In the south wall of the aisle is a neat Tudor brick doorway (similar to that at Bramerton), giving access to what was a chapel during mediaeval times. This was probably the chapel of St John the Baptist which was founded by Thomas Hotte in 1505 and until the mid-16th century was the meeting place of the Guild of St John the Baptist. Since the 1883 restoration this chapel has been used as the vestry.
On the wall nearby, framed with brick, are memorial tablets to Leonard and William Hood, who died in 1705 and 1711 respectively. Leonard’s memorial has a skull and Williams  epitaph which is worth reading.
The clerestory windows are simple two-lights. Those on the north side are edged with Tudor brick, but their counterparts at the south have been renewed during recent times.
The porch is lit by single trefoil-leaded windows and in the north-east comer of ~e porch are the remains of a Holy Water stoup. Both the south doorway and its blocked counterpart on the north side date from the 14th century.
The interior of the church
Although not a large building, the church is bright and spacious, partly because of its height and partly because of the wide arches linking the nave and the south aisle.

There are many interesting features, although the church was heavily restored in 1883 at a cost of £600, when the floor was raised, the font moved, and the old three-decker pulpit replaced  and the nave and aisle filled with new seating.
The font has a square bowl of 14th century style and there are blank arches in the Decorated style carved on each of the four sides. These are either remarkably well preserved, or have been replaced probably the latter. The font rests upon five circular pillars, after the Norman fashion.
The roofs of the nave and aisles are framed by mediaeval timbers and have carved wall-plates. There are three tiebeams in the nave and carved spandrels in the aisle roofs.
The south aisle is divided from the nave by an arcade of two wide bays, with a central octagonal pier which has a moulded capital and base.
The broad nave leads the eye eastwards to the screen and chancel. Beneath the chancel arch in mediaeval days stood the great rood (or crucifix) and beneath this was the painted rood screen, at the summit of which was the rood Iott where the cantors would sing and candles would blaze. Access to this ‘gallery’ was obtained by means of the rood loft stairs, which remain in the north wall.

There is an arch on the south side which would have given access to a similar loft above the parclose screen, which separated the eastern chapel of the south aisle from the rest of the aisle. In this arch now hangs a small and ancient sanctus or sacring bell, made between 1586 and 1634 by William Brend of Norwich. Its original position would have been on top of the screen.
This church still retains the dado (or base) of its 15th century rood screen. (The upper parts were added during the 19th centuw, probably during the 1883 restoration.) This is a great treasure of the church, because its painted panels are of a rare variety showing angels rather than saints. The six panels on the north side have been greatly restored and ‘touched up’, but those on the south side have beautifully preserved mediaeval paintings of angels and landscapes of hills and trees. Across these panels stretches a scroll, which reads, Tomas Hotte and Betreis his wide Gloria in excels Deo: et in terra pax hoibbone voluntatis laudum’.  Hotte and Beatrice his wife give praise. Glow to God in the highest and on earth peace to men.)
Thomas Hotte, who founded the south chapel of St John the Baptist, and also probably paid for this screen, or for its restoration, lies buried before it and is commemorated by one of several brass inscriptions to be seen in the nave floor nearby. Only one of these inscriptions has an effigy and this is the tiny (about 6½” high) effigy of a child – a girl – with long flowing hair. This is Margaret Al&iehe, who died in 1525 ‘in her floryching youthe’.

In the floor to the north of this is the upper part of an ancient coffin lid, with a foliated cross. There are several ledger slabs in the floors of this church, including three fine ones in the south aisle, commemorating members of the Rant family.
On the south aisle wall is a handsome wall plaque in memory of Humphrey Rant, who died in 1661 – a very lovely example of its type.
Also in the south aisle, further eastwards, is a tiny coffin lid, with the usual cross. This is beautifully preserved and probably marks the burial place of a child.
The choir stalls in the chancel were erected in 1883, but careful observation will reveal that mediaeval poppyheads, preserved from lost benches, have been cleverly inserted into the tops of the ends of some of these 19th century stalls.Notice the difference in the colour and texture of the wood.
Until 1955, the church had a ‘Positive’ organ. A new organ was built for the church in 1955 and this has since been rebuilt by Stoor.
In the sanctuary is a trefoil-headed piscina, also a windowsill sedilia. Another similar piscina can be seen in the south chapel, which is now used as a vestry.

Several examples of 17th and 18th century woodwork can be seen in this church. There is a Jacobean chair in the sanctuary and the door to the tower and its surrounding woodwork and the ‘screen’ which forms the entrance to the vestry, seem also to be of this date. The Stuart altar table came originally from Bletchington, Oxfordshire.
If you would like to help support the maintenance of this church, please contact:

If you have family links with Yelverton or Alpington, or have information about the church or village, please contact:

The Saturday and Sunday Blog is your source of ideas for the perfect family weekend, days out and holidays with children.